What was the old Sports Illustrated cover? Irresistible Oklahoma. Immovable Nebraska. You could use it for the Week 3 Game of the Week, so we will.

A marquee matchup in Class C-1 pits top-ranked Aurora (irresistible) against third-ranked Wahoo (immovable). Both teams are off to 2-0 starts and doing it much as we expected, the Huskies with offense, the Warriors with a stingy defense.

The Warriors are working to replace running back Dylan Egr on offense and a slew of skill players from last season’s 10-2 team. So far they have done it behind a line that returned four starters — Sam Kolterman, Jack Sutton, Gunner Vanek, and Brandon Swahn — and a smothering defense that has allowed just 19 points in two games.

The Huskies have done it with video game production on offense from quarterback Baylor Scheierman who last week set an NSAA record work eight touchdown passes as the Huskies scored 66 points in a win over then-No. 8 Kearney Catholic. The South Dakota State hoops commit threw two each to Cade Reichardt, Jordan Stevenson, Cy Bullermand and Ryan Hunter. Reichardt and Bullerman are each in the top-5 in the state in receiving yards. 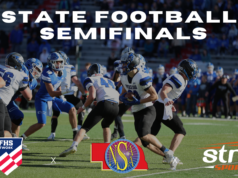