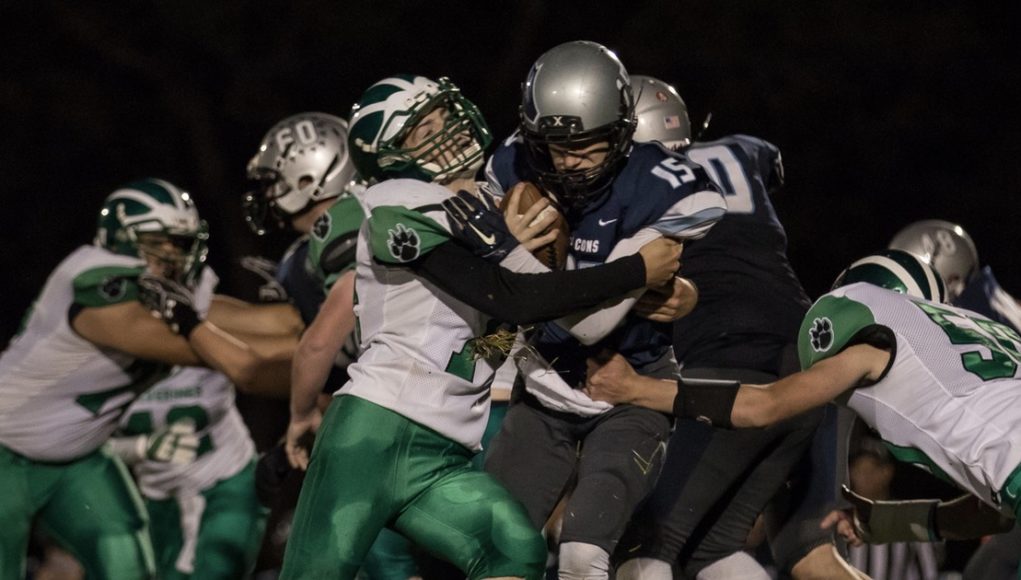 IN THE BOWL, ADAMS — Wilber-Clatonia has not missed the Nebraska football playoffs since 2007.

The reason for that, mostly, has been dominating line play and good-to-excellent defense. Stuff that usually separates good from great and average from good. It was all on display in an ever-important district game on Friday night.

The Wolverines were 3-1 as were the opponent Freeman Falcons entering the second season. On paper, it appeared this game would go along way toward crowning a District 1 champ.

And, after a scoreless first quarter, the Wolverines clicked — had fun — won 37-0 with, you guessed it, excellent line play and defense.

“That’s probably as well as we have played all season,” W-C Head Coach Lynn Jurgens said. “We have been waiting for that team to show up all year. I knew we were capable of it.

“And we knew we would have to play like that or Freeman would beat us.”

It was senior Coltin Rezabek — can you believe we are still typing that name — that started the avalanche for W-C with a 21-yard interception return just over halfway through the second quarter. Rezabek is a four-year starter on defense.

“He’s always around the football,” his coach said. “He just makes plays, he’s a big play guy on our team. We are lucky to have him.”

After Hunter Cerveny gave the Wolverines a 14-0 halftime lead the offense fired up in the third quarter as quarterback Michael Pulliam connected with Tad Moldenhauer and Mason Zimmerman for touchdowns and the defense added another score and a blocked punt for a safety.

Most importantly, football was fun again for the Wolverines.

“We have played with no emotion, no heart,” Jurgens said. “We have been preaching it this week. “We talked about it in the locker room that no matter what we going to play this game with emotion and play it right.

“I think they really had fun tonight.”

Up next for that powerful defense? The state’s leading rusher, Josh Bailey of Johnson County Central who is averaging 22 carries and 10 yards per rush in five games.

Up the road in Seward, in person, the Rewind saw about the craziest darn football game you’ll ever see. Northwest fended off this final play from the Bluejays to win 44-40.

Absolutely INSANE ending to @GINWFootball and @SewardFootball. The Vikings score with 37 seconds left and then stop THIS to win 44-40. #nebpreps pic.twitter.com/kyT7Bxach9

With 37 seconds left, quarterback Carter Terry had connected with Mitch Vitera for on a 17-yard score that brought the Vikings all the way back from a 40-31 deficit with under seven minutes left.

God bless the Vikings for surviving this long.

After hosting winless Gering on opening night Northwest has faced four straight undefeated opponents — McCook, Scottsbluff, Aurora and Seward. All are still unblemished, save the Bluejays, so those opponents have a 20-1 combined record.

“Their daubers weren’t down, but they were definitely questioning themselves,” Head Coach Kevin Stein said. “They have had really good practices. I thought tonight we had fresh legs.”

They needed them because it looked bleak for a long, long time.

Seward shredded the Vikings in the second quarter behind the passing of Joseph Krause — he finished with 425 yards. But, 254 were in the first half. In the deciding fourth quarter, he was just 5-for-14 for 98 yards as NW forced a turnover on down and two punts before the final possession.

“Our coaches went to a 3-man front,” Stein said of a defensive switch at the half. “We were good against their run game, not great. But, we made just enough plays to get it done.”

Counter Krause’s fourth quarter to Terry’s. With the game on the line he was at his best, completing 14-for-16 passes to — wait for it — six different receivers in the fourth quarter for 139 yards. His pass to Vitera capped a 16-play, 99-yard drive that took just 2:37.

Terry said the Vikings might be better for surviving the September stretch.

“We knew our schedule was brutal,” Terry said. “We just had to stay the course and trust the process. We just have to keep coming to practice everyday and working hard.”

A lot of bummers out there from last Friday, but Westside moves up with a dismantling of Creighton Prep. And, Bellevue West pulls away from Pius. The top teams in A seem pretty clear.

C2 No. 1 Centennial came back to defeat No. 5 Aquinas 28-21 on Friday with a Wyatt Ehlers to Jackson Hirschfeld pass. Records were broken. All we have is this summary.

Other big games? Centennial is at it AGAIN, facing unbeaten North Bend Central. The Tigers Austin Endorf is second in the state in passing yards. Watch that one! The aforementioned Wilber-Clatonia at JCC game is a big one.

You know who else is still winning? Riverside. In 8-man, not six. Consecutive home games up for the Chargers before a October 12 road game on the turf at Humphrey St. Francis.