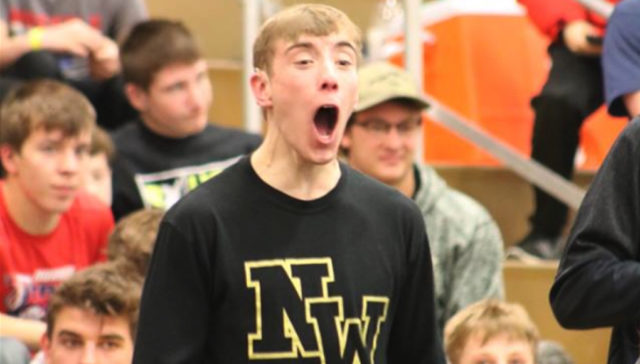 There are a few pillars of the Grand Island Northwest wrestling program that stand out to you when you enter the wrestling room of one of the top Class B programs in the state. It makes you think coach Brian Sybrandts is more about building winners in life than wrestlers.

The last one — communication — takes on a whole new meaning for he and Viking senior Grayson Fries. Fries, Sybrandts’ four-time state qualifier, takes the mat one last time this weekend at the Nebraska State Wrestling Tournament at CHI Health Center in Omaha.

“He’s one of the kids who really got us started,” Sybrandts said of the three state dual qualifications and team state runner-up finish last year that Fries has been a part of in high school. “He’s a kid who wants to be the best. He works his tail off. Other kids see that and they want to be like that.”

The hard part is that what many don’t know about Grayson Fries is when he’s on the mat, he can’t hear a thing. He’s been deaf since a young age when his parents, Kevin and Dana, recognized that he was having trouble hearing between his second and third birthday.

Grayson and his parents — in separate interviews — both share many of the same stories about growing up as a toddler in North Platte before they moved to Grand Island before Grayson entered school.

Grayson was born at 28 weeks, due to complications in Dana’s pregnancy. She was diagnosed with HELLP Syndrome which generally comes with elevated liver enzymes, and a low platelet count. It usually begins during the last three months of pregnancy and generally results in a baby being born as soon as possible.

“Basically, my body was allergic to Grayson,” Dana said.

And, while Grayson was very premature, he was as healthy as could be expected. He passed his newborn hearing tests at three months.

In the garden back home and with an adjusted mirror in the car is where Kevin and Dana knew something wasn’t quite right with Grayson, who had developed an early love for football.

“One time we were all out in the backyard in the garden and Dana said something to him and he turned to Dana and grabbed her face and said, ‘Hey, mom, look at me when you talk.’ He was already starting to read lips. We started talking to preschool teachers, we found out he would sit right on their laps when they read,” Kevin said.

“He would also have us adjust our rear view mirror in the car, so he could see us talk.”

While audiologists can’t for certain trace any of the hearing loss back to his premature birth, they also don’t rule it out. No matter, it wasn’t slowing down Grayson Fries.

Grayson smiles sitting up in the wrestling room for one of the final times. He’s asked about any of his first matches when he was a kid.

“I lost one of my first matches to a girl,” he jokes.

He started wrestling early — around the age of five — just before he had cochlear implant surgery. With the implants, he has about 75% hearing and speaks normally, a sign that he’s not been deaf his whole life. But, on the mat, he takes the hearing aids off.

Audiologists at Boys Town were quick to rule out contact sports for Grayson.

“He supposed to be playing golf and tennis,” his dad said. “He couldn’t play football. We tried basketball but there was so much communication he had a hard time. We went to wrestling and he could take (the hearing aids) off and he could function.”

But Grayson’s love for wrestling was evident even at that young age and his parents committed to doing whatever they could to foster his love as long as he was having fun. Kevin started coaching to help others with communication. They traveled, Grayson went to camps.

Mom finishes the story about the five year old girl. Back in North Platte.

“We had gone up there for a tournament,” Dana said. “She was a cute little thing with braids. He didn’t know what to do. He didn’t want to touch her. He had scratches from fingernails. But, he came back through the losers bracket and she won the winners bracket and he beat her in the finals.”

It was evident early, Grayson Fries wasn’t giving up.

He’s zoned in and ready to go for his final meet, his final time in Omaha that’s only for a select few. The little kid born at 28 weeks who has been through more than most should have to face, gets to do it for the fourth time.

In a loaded 120-pound bracket in Class B, Fries has his sights on the medal stand. He medaled as a sophomore and was taken out in the heartbreak round last year as his team was the state runner-up and finished third at state duals.

“We should be good on weight,” he said, something that he and dad have had to monitor all year. He was naturally a 126 pounder kid this year, but cut to 120 to fill a void on the Viking team. “It’s exciting when it comes down to this. I am always nervous all the time, but the state tournament is the best. You have to come ready to go.”

Getting beat where he did last year has given him a focus for 2019.

“It was heartbreaking last year,” he says, no pun intended. “I really want to prove myself this weekend.”

As for his coach, there is something special about seeing Fries hit the mat one more time.

“He makes me proud,” Sybrandts said. “He’s the ultimate competitor. It’s different to coach him, but we have learned. We have tried to coach him to coach himself out there so he knows what to do with certain situations.

“But, it’s been so much fun. We are definitely going to miss him, just because of his personality and how committed he was to our program. He’s a great leader.”

He’s not done, wrestling, either. Fries has committed to wrestle next year at Iowa Lakes Community College.

Omaha, and the 2019 state wrestling tournament, is gravy for Dana Fries, who now can’t even sit and watch a basketball game.

“It’s exciting. I get nervous for him,” she says. “I know how much he wants things. I move and try to do what I think he’s going to do. Your heart breaks if it doesn’t go well. But, this is just an awesome reward, being at the state tournament.”

And, for the Fries family, wrestling has offered lessons that go well beyond the mat.

“My dad got me involved in it when I was young and he’d take me everywhere I wanted to go,” Grayson said.

And, what dad has seen is more than medals and wins.

“Hard work. Dedication. Wrestlers are crazy in a sense,” he smiles. “He learned that whatever you do in life you have to work hard at it. He can use that the rest of his life.”

Yeah, Grayson Fries is a little different than the other 895 wrestlers in Omaha this weekend. But you’d never know that when he steps on the mat. His goal is the same as everyone else.

Whether he can hear you or not.