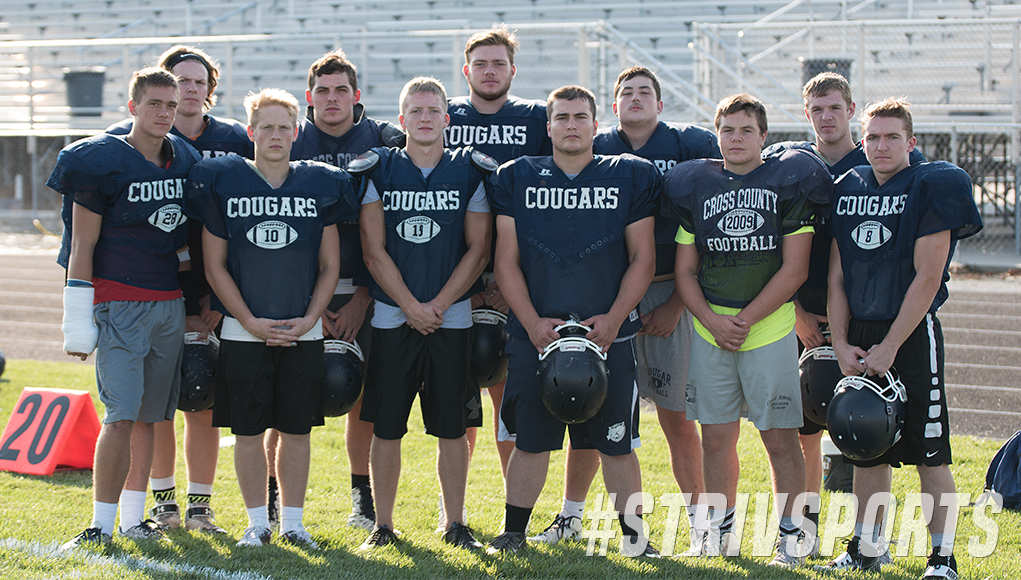 Tanner Lamoree was quick to admit that the Cross County Cougars return to 11-man football wasn’t quite what he and his teammates expected.

“We came out and got punched in the mouth,” he said.

No worries, though. It didn’t last long.

After falling behind 13-0 in the first quarter to Norfolk’s Lutheran High Northeast, the Cougars — and their 11 seniors — went to work. They scored the final 35 points of the game, kick-started by Lamoree’s school record 83-yard touchdown run in the second quarter.

“I think they were some jitters,” Cougar coach Ty Twarling readily admitted. “You know, we were playing our first 11-man game, we were on field turf which is kind of new to us.

“But, we just let our kids respond and they did.”

Lamoree wasn’t done, of course, running behind his buddies just like it’s been since sixth grade. He finished with a school record 320 yards on 27 attempts, the 83-yard score also a record.

The line, left to right, also has five seniors. Hunter Miller, Trayton Nienhueser, Garrett Davidson, Keegan Lane and Hayden Fowler have been in a few battles together.

Miller said the transition to 11-man was more comfortable than he expected.

“I think getting all five guys on the line has been a lot easier for us,” he said. “And, I think our blocking schemes are a little easier.”

Twarling said this group of seniors has been a model for his program. One that they will have to lean on with a schedule that features six remaining teams that won their opening contest, including No. 5 Sutton and No. 8 Centennial.

“They have been a tremendous group. They bought into the weight room from day one,” the coach said. “They are in here at 6:30 in the morning and getting work done.

“Just a really special group that has always done things the right way.”

Three more seniors did the dirty work on defense for CC in their opening win. Christian Berck, Alex Dubas and Trae Meysenburg all had 11 tackles for the Cougars who held LHNE scoreless the final three periods.

Lamoree, who added 10 tackles, said the extra help on the defense has made that transition a bit easier as well.

There will be new faces and teams weekly this year as the Cougars make the transition. Friday’s opponent, St. Paul, drops down from Class C-1 this year. One that Twarling said has the Cougars full attention after a 34-12 week one win over Wood River.

“You could tell watching their film that they just got more confident as that game went on,” Twarling said. “We are going to have to be ready. They run option and veer with a really good quarterback.

“You hope we can get off to a better start and not give them any confidence.

Miller said they’ll show up and play hard every Friday.

“We don’t really know much about anyone we play this year,” he said. “We don’t know anyone in C-2. We are just trying to do what we do the best and not worry about the opponent.”

New opponents and new faces, but one thing familiar thing to lean on at Cross County. A special group of senior leaders.

GOLF: Danica Badura, Aurora. The freshman fired a 3-under 71 at Seward to take individual honors and help the Huskies to the team title as well.

SOFTBALL: Maddie Moser, Central City. The senior pitcher is 4-0 with a 1.47 ERA through four games for the seventh-ranked Bison. She has 35 strikeouts and just two walks and is batting .400.