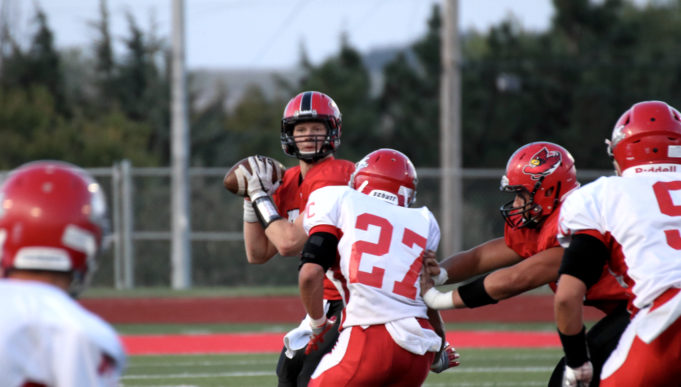 THROUGH THE WIND AND RAIN AND LIGHTNING, CENTRAL NEBRASKA — The Rewind played a little golf on Friday afternoon, got cut a little short and sped up to Albion for their first Jeff Bellar Experience.

It did not disappoint.

Since Bellar took a one-year hiatus in 1995 to coach Norfolk High School — he quickly went back to Catholic — the Knights haven’t missed the playoffs since 1996. They have played in ten state championship games and won seven.

The Rewind is humbled by the amount of lives this man must have changed and made better.

Don’t get caught up in this being an advertisement for Bellar and his bunch, however. BC/NG (2-2) is playoff caliber team — they can even win a game or two — that heads now to a district schedule that is manageable and winnable.

Coach Mark Hudson knew they’d need near perfection on Friday night. They were pretty good — really good — we doubt anyone puts up 455 yards on the Knights the rest of the season. But, an interception at the goal line and bad snap late while the Cardinals were driving turned into a touchdown for NC.

“That’s a tough team,” he said. “What can you say? They do a lot things really well. And they just keep pounding on you until something pops. We’d play really good for awhile and then all off the sudden No. 1 would get loose.”

Ah, yes. No. 1 — Dylan Kautz. He’s been wowing the state since he was a freshman and he keeps getting better. Last night, it was 25 carries for 232 yards and his backfield change-of-pace mate Evan Smith who had 12 carries for 62 yards.

But, Bellar had as much praise for Cardinal quarterback Dylan Gentrup who ran for 128 yards and a touchdown and threw for 269 and four more. Receiver Cody Nelson had nine receptions for 186 yards.

“I am disappointed how we played defensively,” Bellar said, “but I want to be careful when I say that because I think they are very good. That quarterback is one of the best we will see this year. He just made a lot plays. You have to give credit where credit is due. He is very, very good.”

The whole football game was very good and through the storms back to Grand Island on this late night, it was well worth it. Two teams we’d like to see again in November.

Class A
Double Trouble: Sargbah, Gray over 200 in North win

Class B
Skutt hits on all cylinders; hammers Elkhorn

Columbus pulls away from Norris

Class C-1
Johnson, Jeffs get big plays to pull away from Auburn