Eight struck the clock at Morrison Stadium in downtown Omaha. Daylight faded as Millard West and Marian High School prepared to face off. The Wildcats dressed in white with kelly green numbers while the Crusaders strutted out in black with blue block numbers.

This wasn’t the first time the two went head to head for the state title. Last year, the score stayed tied 0-0 in the semifinal matchup, leading to a shootout until Marian pulled ahead for the win. Marian went on to beat Millard North 1-0 for the championship.

The No. 4 ranked Wildcats were 1-1 in the regular season against the No. 3 ranked Crusaders. Millard West confidently dispatched Bellevue West and Millard North on the way to the finals. Marian also drifted past Westside and Lincoln Southwest, ready to defend their title.

The Millard West boys’ team had just won the championship the night before against Creighton Prep, 3-1. The last time that happened in 2009, the Millard West girls also went on to win so the pressure was on.

The first half dragged by with a packed student sections chanting and screaming for someone to score at Morrison on Tuesday, May 19th. Rain drizzled down on the two teams, yet they continued to fight for a goal in the second half. With about 19 minutes left in the game defender Megan Merkel took a chance on a strike from 35 yards out. The ball flew through keeper McKenzie Meola’s hands and into the back of the net.

The Wildcat section, dressed in all black for the occasion, shouted and came alive. Minutes later, though, Marian’s Madeline Weight angled in a goal evening up the score. A double overtime later, the match went into a shootout. Students ran to the stands behind the net to cheer on their team and intimidate their opponent.

“I was very confident in my teammates because we practice them [penalty kicks] every day,” Merkel said.

Mallory Broady led the shootout for the Wildcats, barely missed and skimmed the outside of the bottom left pole.

The Crusader’s Mallory Edwards slid one past keeper Sydney Cassalia, leading the charge 1-0. Olivia Pesek stepped up and sent the ball in for West to tie it up. Wright approached, but it was blocked by Cassalia. It continued until Wildcats’ Jaylin Bosak pounded her shot into the side netting, 3-2 while Marian’s Susie Dineen missed.

It all lead up to freshman Kenzie Coons who had ironically had been in this same position during the Metro Conference tournament during a Wildcat overtime victory over Marian. Coons smacked the ball in yet again, winning the shootout 4-2 and taking home the state championship trophy. This would be the fourth win for head coach Jacque Tevis-Butler and the second title in three years for the girls.

As the ball sailed into the net, the Wildcats screamed and ran to encircle Cassalia for a gigantic group hug. The cluster fell to the ground in a celebratory heap. 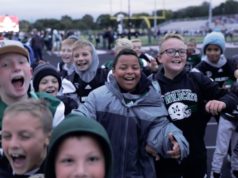 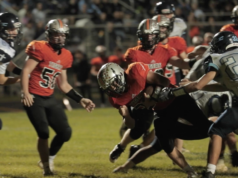