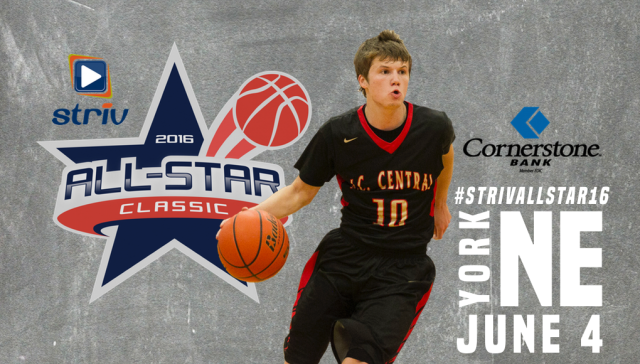 Striv founder and CEO Taylor Siebert is excited to announce that York High School will again be the host for the 2nd Annual Striv All-Star Basketball Classic presented by Cornerstone Bank on June 4. The girls game will begin at 6:00 with boys to follow at 8:00 and there will be a 3-point shooting contest between games.

“We were floored by the success of last year’s event and the response we got from players, coaches and fans. This is a great way for us to showcase our student athletes,” Siebert said. “Our growth and commitment to help sharing a school’s story is highlighted by this event. With over 70 schools, we have plenty of great athletes to choose from and we hope to put on a fun, family-friendly event with high quality basketball being played.”

Siebert also excited to announce four coaches for the game who all won over 20 games in 2015-16.

The boys teams will be coached by Elmwood-Murdock’s Matt Shelsta and Fillmore Central’s Jim Rose.

Shelsta led the Knights to an appearance in the Class C-2 finals after E-M pulled one of the biggest upsets in state history in the semifinals over Winnebago. They finished 24-5. Rose led the Panthers to their best record in over a decade as they were ousted from the postseason by state champ Hastings St. Cecilia in the district final while finishing 21-4.

On the girls side, Friend’s Scott Kraus and Hampton’s Margo Labrie will lead the two teams.

“We are honored to be able to get four great coaches and leaders to participate in the game again this year,” Siebert added. “It should be another fun night.”

Players were nominated by coaches and then selected via a draft creating a game format where three sets of high school teammates will be on opposite sides for the girls game.