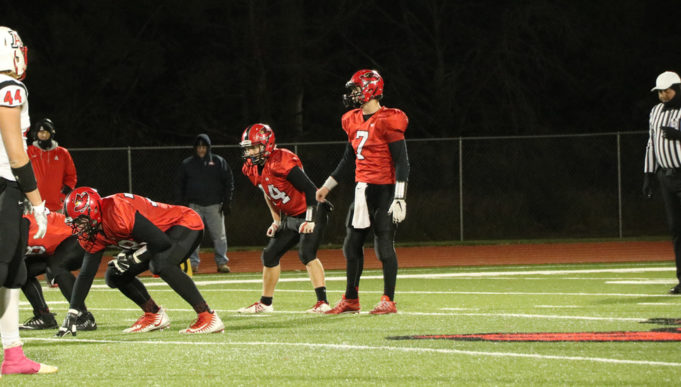 OVER THE LOUP RIVER AND UP HIGHWAY 14 — The Rewind battled wind and cold — even the non-Rewind Striv guys did the same — to take in some playoff action on Thursday and Friday, bringing ever version to you on social media and through our school live streams.

In all? It was Henderson, Friend and Fullerton. Cedar Rapids. Then, Albion and York on Friday night to complete the first round of the 11-man playoffs.

We found out that football continues to be the best teacher of life. Ask Osceola coach TJ Nielsen who had to bid goodbye to five seniors — he rattled off their names to me like they were his son’s — who have been instrumental in turning around the culture in his town. Fullerton clipped them 30-24 to advance.

The wind howled through my headphones in listening to our chat.

“Caden Theis, Brennan Bryan, Garrett Fischer, Derek Vogt, Tristan Johnson,” he said. “These kids, since day one when they were freshman, I remember it, we had some injuries and they had to play from day one. They played for 38 straight games and never came off the field.

“They started 38 straight games. A great group of seniors and great football players. But, even better students and better men. We are very proud of who they are and we are going to miss them. But they left a great mark on our program.”

See, there is the lesson of high school sports. Not just football. But, all of them. Now what they will teach you now, but later in life when you reflect back.

Those lessons and the lessons of being part of a community like Albion. Ask Boone Central/Newman Grove coach Mark Hudson.

“We talk about playing for your brothers, and your family and your town,” Hudson said after his bunch beat Auburn 40-3 to advance in the Class C-1 playoffs. “As soon as we lost our second game (to top-ranked Norfolk Catholic), No. 7 (Dylan Gentrup) and myself we just said, ‘We made a lot of mistakes’ and if we clean those up we’ll be fine.”

The Cardinals have been “clean” to say the least since that 48-35 defeat on September 15th dropped them to 2-2. Six straight wins. 44 points allowed.

You also, in these playoffs, get to learn about the future a little bit. Ask Fullerton coach Ryan Haughton. They moved to 8-1 when they flipped the table on Osceola. He’ll take just three seniors on his 24-man roster to Bruning on Wednesday to face the top-ranked team in D-2. Very few will give them a chance.

“We’ll go there planning to win,” he said. “It will go for miles for us. You have kids now that have won a playoff game. We’ve been to six straight playoffs in a row so that’s in there DNA, but winning playoff games is a whole different ball of wax.

“Now, we have a team that will have 23 kids coming back next year that has to go play, maybe, the best 8-man team in the state. We are excited for that opportunity.”

Here is a look around our trips from the first round of the playoffs.