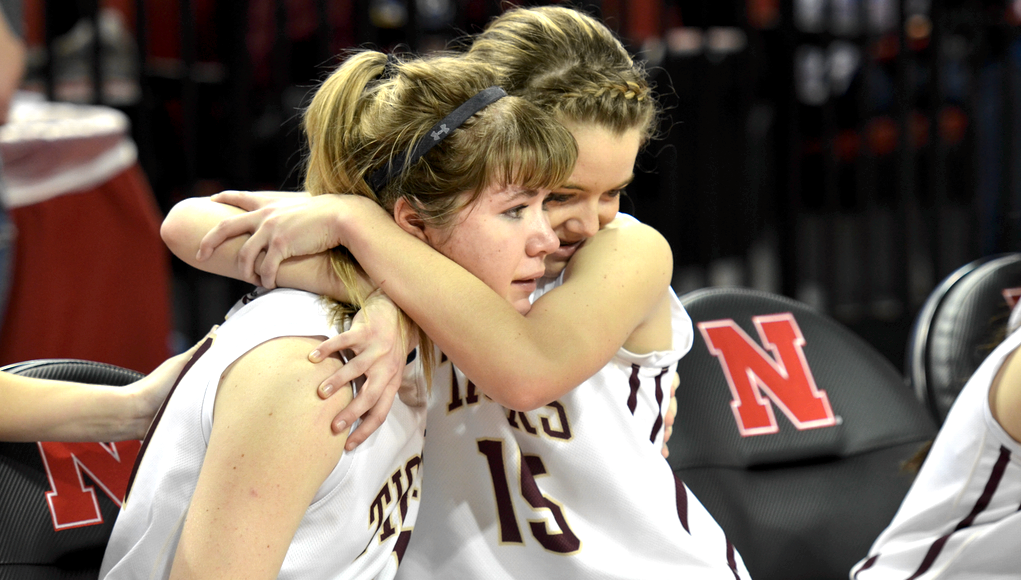 LINCOLN — Momentum can be a silly thing.

St. Mary’s used a whole bunch of it and a hammering of the offensive glass to pull away from previously undefeated Dundy County-Stratton for a 52-33 win in the Class D1 final at Pinnacle Bank Arena on Saturday.

It gave the Cardinals their first state title in hoops after losing in the championship game in 2013. They did it on the glass in the second half.

“We had a gap in the trophy case at our school,” St. Mary’s coach Tracy Berg said. “I really felt with this team, we could get a state championship and we did accomplish that.”

Trailing 20-18 at the half, St. Mary’s went to work. Sydney Hupp scored in the lane and then she started the second chance barrage. The next five Cardinal buckets would all come on second chance attempts.

Then, Addie Wetzel took over.

She scored off rebounds and was fouled on three straight possessions that moved the lead from 24-22, to 33-23 with 2:10 left in the third quarter and DCS could never get closer than 10 points the rest of the contest. Wetzel finished with a game-high 17 points, while also grabbing six rebounds.

“We just couldn’t get going,” Behlke said. “Their pressure got to us, and we knew they’d probably go man-to-man in the second half. We go frazzled after they went on that run.”

It also seemed to affect the DCS offense as well. They were just 2-for-10 from the floor in the decisive third period, while SMH was playing 10 players rotating every two minutes.

“I told them at half that we had to be tough,” Berg said. “We had to play tough defense and rebound and go hard. We said we’d sub five in, five out and you had to play hard for a minute and a half. That help us go all out.”

And, it wore on the Tigers as the period went on.

“It affected us a little bit,” Behlke said of the Cardinals depth. “Anytime you get fresh legs against tired legs, it will make an impact. We thought were conditioned well enough. The dagger that hurt us was when they just kept getting the and-one’s in the second half.”

Neither team lead by more than four points in the first half. DCS took a 20-18 lead to the locker room on Aubrey Frederick’s putback with just over a minute remaining. SMH didn’t score the final 3:57 of the first half and led 14-12 after the first break on Sydney Hupp’s basket at the buzzer.

Hupp added a double-double of 12 points and 13 rebounds for the winners, who like DCS escaped on Thursday with a 75-73 win over Friend in the quarterfinals. No Tiger reached double figures as Faylee Stanford scored nine points for DCS.

The season, however, was not lost on Behlke as the Tigers finished 28-1.

“It’s obviously the goal to get to the state championship game,” Behlke said. “The first thing we do is set goal and that was one of them. I don’t think the team believed it until the last three or four games of the year.

“We thought we could make the tournament and win some games here.”

They did. And they’ll remember that southwest Nebraska for a long time.